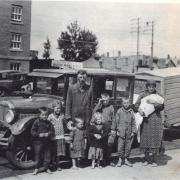 I have used this photograph (Glenbow Archives ND6742) several times over the years in different history textbooks I have written to illustrate the destitution in Western Canada during the Dirty Thirties. It shows the Fehrs, a Mennonite family from the Saskatoon area, stranded in Edmonton in June 1934. It is a heart-breaking image depicting the hard times suffered by so many Canadians at the time.

Before Christmas historian Bill Waiser wrote a blog post about the Fehrs, and the photograph. It seems that Peter Fehr, the baby boy that Mrs. Fehr is holding, died last October at the age of 82. Waiser informs us that when the photo was taken the Fehrs were on their way back to Saskatchewan after a failed attempt to get established in Alberta's Peace River Country. Despite almost starving to death, the family made it home and the father eventually acquired some land which he, and then Peter, farmed successfully for many years.

Waiser calls this "one of the most famous photographs in Canadian history." What I had not realized until I read his blog was the tenuous connection between the Fehrs and my own family. During the 1930s, when the Fehrs were struggling, and failing, to make ends meet and having to leave Saskatchewan in search of greener pastures, my grandfather, Clarence Daniel, was in charge of dispensing government relief to aid families just like the Fehrs.

In 1931 the provincial government of Saskatchewan established the Saskatchewan Relief Commission to assist people impoverished by the drought and the adverse economic conditions. My grandfather, a Moose Jaw realtor and businessman at the time, was named general manager of the commission, a position that meant that over the next three years he administered about $34 million of public relief. Waiser does not say if the Fehrs received assistance before they lit out for Alberta in 1932 but if they did it was my grandfather who signed the cheque, however inadequate the amount turned out to be.

In June 1934 a provincial election swept the Conservative government out of power and installed a new Liberal administration led by Premier James Gardiner. Gardiner immediately disbanded the commission and in August my grandfather, like so many people at the time, was out of a job. Though I certainly wouldn't compare his situation to a farm family like the Fehrs.

It was about this time that my grandfather abandoned his wife and daughter, my mother, and disappeared from the family, not to reappear for another 35 years. But that is a different story.