Hitler in the Bookshop 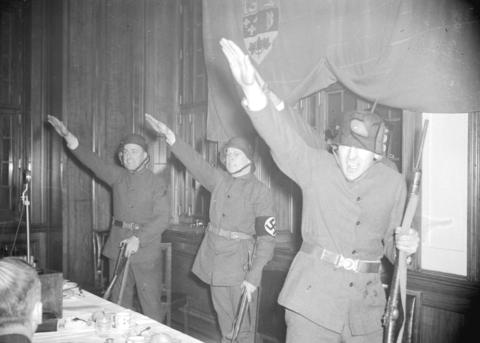 Tom Hawthorne has an interesting article at Montecristo Magazine about an episode in wartime Vancouver when some members of the Junior Board of Trade pretended for a day that the city was occupied by Nazi invaders. A mob of "soldiers" occupy the radio station. The mayor is marched off to a concentration camp. Storm-troopers goose-step their way down Granville Street. Well, you can read the details for yourself. (The photo is from the Vancouver City Archives 1184-31)

What did not occur to the fun-loving business types, who were only trying to encourage the sale of Victory bonds, was that the frightening future they were imagining was that very day, Feb. 25, 1942, a reality for the city's Japanese residents who were being rounded up, dispossessed of their homes and property, and shipped off to internment camps in the interior. They did not need to imagine what tyranny looked like; they were experiencing it first hand. The front page of the Vancouver Sun that morning had a banner headline: "Every Jap To Be Evacuated from BC Coast".

Aside from the obvious irony, what made the article particularly interesting to me was a detail Hawthorne mentions near the end. "If the Nazis Win Day" wrapped up with the phony invaders being routed, including a Hitler look-alike named Charles Elkin.

It turns out I knew Charles. I had not thought of him in years but during the winter of 1969/70, when I was fresh out of university, I worked with him in a bookstore on Granville Street, the Book Barrel. He must have been then in his fifties. I remember him telling me that he had come to Vancouver as a refugee from Germany during the 1930s and that his first job had been packing supplies up the North Shore mountains to the ski cabins there. And I recall him mentioning that during the war he had impersonated Hitler and had had rotten vegetables thrown at him during anti-German demonstrations, just as the article describes.

Charles was not suited to retail. He did the heavy lifting around the store and organized the shelves -- he had a peculiar way of arranging the books, not alphabetically but by descending order of height -- but he did not interact well with customers. Indeed he got himself fired one day when he was rude to a patron who turned out to be the wife of an investor in the store.

That was the last I heard of Charles, until Tom Hawthorne's article brought back those days in the bookstore.

The incredible story of post-WWI Canada, poised on the brink of social revolution. A gripping account of a little known episode in our history. Also available in French.

Those generous folks at Harbour Publishing have done us all another favour. They've republished Crawford Killian's classic history of Blacks in British Columbia, Go Do Some Great Thing, which first appeared in 1978. Not only that, they've made the...

With its most recent issue, Canada's History magazine achieves a notable milestone -- 100 years of continuous publication. Founded back in 1920 as the Beaver, a staff magazine for the Hudson's Bay Company, it has been independent of the HBC for...

The annual BC and Yukon Book Prizes were held over the past weekend in a responsibly distanced manner. My friends at the Ormsby Review have kindly posted the winners, which is a good thing since you'd be hard pressed to find the results in any of the...