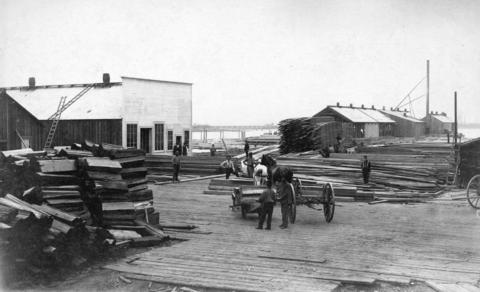 The Dr. Sun Yat-Sen Classical Chinese Garden is one of Vancouver's feature attractions. Opened in 1986, it was built under the direction of master craftsmen from Suzhou and was the first garden of its type outside China.

Last week I paid the garden a visit, not I must admit to drink in its contemplative landscape but to view an exhibition by local historian John Atkin, "Sawmills and Opera Houses: A Brief History of Block 14 and the Origins of Chinatown." Block 14 is the designation for the chunk of land on which the garden stands and it turns out to have had a very significant history.

During the pre-World-War-One period this slice of Vancouver was home to two major industrial sites. The Royal City Planing Mills (photo above courtesy of Vancouver City Archives AM54-S4-MiP10) stood where Carrall Street met what was then the north shore of False Creek. It opened in 1886, about the same time the city was created. The great fire that occurred that June and wiped out most of the tiny settlement bypassed the new mill, which was then able to prosper by manufacturing lumber used to rebuild the city. By the late 1880s Royal City was the largest lumber operation in the province.

On the other side of Block 14, the Great Northern Railway (aka the Vancouver, Westminster and Yukon) had its tracks, depot and railyards. Until 1917 its passenger depot stood at the corner of Dupont (now Pender) and Columbia. Then it moved to Station Street where the inner False Creek mud flats had been filled in to create useable land for the railways.

As Atkin explains, at the end of the 1880s Block 14 was the original Chinatown, with many businesses, tenements and even a Chinese Opera House. Then, in the early 1900s the heart of the community shifted slightly west to "New Chinatown" centred on a couple of laneways known as Shanghai and Canton Alleys.

There is a lot more information compacted into Atkin's fascinating exhibition which remains on display at the Sun Yat-Sen Garden for another week.