Tales of the City #3 - Houdini's Visit 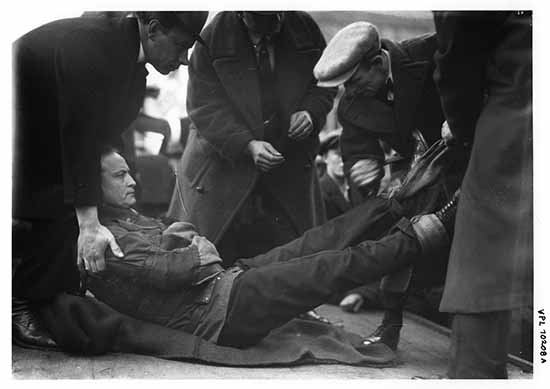 While waiting for my next book, Becoming Vancouver: A New History, delayed by the COVID situation, to be published, I thought I would introduce the project by telling some "tales of the city."

In Vancouver between the wars popular entertainment flourished in the vaudeville palaces, cinemas, music halls and hotel bars along Hastings and Granville streets. One of the most anticipated shows in the city’s history was an appearance in 1923 by the 48-year-old magician and escapologist Harry Houdini.

Houdini appeared twice daily at the Orpheum Theatre on Granville Street, on a bill that also featured “a Spanish gypsy revue” and a few minutes of “wit, music and patter” by Jack Benny. He arranged with the Vancouver Sun to publicize the show by performing an outdoor stunt at the newspaper’s offices on West Pender. At noon on March 1, as a huge crowd gathered in the street, Houdini allowed himself to be trussed up in a straitjacket by members of the police force (see photo above, courtesy of the Vancouver Public Library 70208A) and hung upside down by the ankles from a crane three stories above the sidewalk.

It took the Handcuff King three minutes and 39 seconds to work himself loose and drop the strait jacket to the ground, at which point, reported the Sun, “a cheer arose and swelled into a roar”. Film footage of the event was quickly developed and used as part of his act that same evening at the Orpheum.

This was Houdini's only performance in Vancouver. He died three years later in Detroit of a ruptured appendix.