Tales of the City #4 - A Funeral and an Eviction 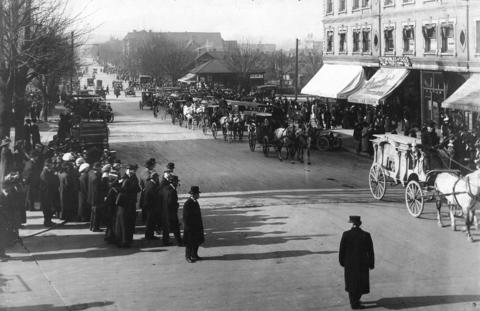 On March 7, 1913, poet and performer Pauline Johnson died at a private hospital on Bute Street in Vancouver's West End. She had moved to the coast a few years earlier after retiring from the stage and had been ill with breast cancer for some time.

The death of the "Mohawk Princess" sparked an unprecedented display of public respect. Many city notables attended her funeral at Christ Church Cathedral. Flags were lowered to half mast and civic offices closed. On-lookers lined the sidewalks to pay their respects, as the photo illustrates (courtesy of City of Vancouver Archives PortP1422). “It was as if the rush and noise of the city had been stayed in respect to this gifted Indian woman,” reported the Sun on its front page.

But I wonder. How many of the mourners were aware, or cared, that their government was preparing to evict the residents of a First Nations village not two kilometres away, having basically stolen the land from them?

Sen-ákw was located at the entrance to False Creek. It had been granted as a small reserve to the Squamish Nation several decades earlier. Commissioner A.C. Anderson had described the village: “Adjoining the house of the Chief is a well-fenced garden, of about an acre or more, in which were growing thirty apple trees, Rasp-berries, Strawberries & other fruit, with cabbages and other vegetables – the whole in very good order."

However, as the city expanded southward the white majority decided that the eighty-acre site was far too valuable to leave in the hands of the sixty or seventy people who lived there. After initially refusing to leave, the Squamish acceded to pressure from the provincial government and in 1913 agreed to sell their land for fear that they would have it taken from them. On April 9, less than a month after Pauline Johnson's funeral, a scow arrived to carry away the twenty or so families along with their belongings. The remaining buildings were torched and the people went to live at other local reserves.

Afterward the provincial attorney general actually boasted how he had obtained the land for far less than it was worth. The last Indigenous village within the city limits was gone. Today a welcome figure stands at the site. 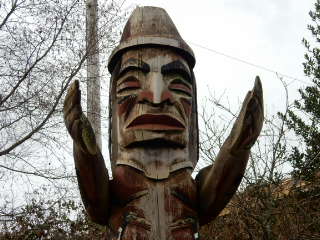 The Ormsby Review, Canada's only provincial on-line book review site, has turned five years old. Named for the pioneering BC historian Margaret Ormsby, the site was the brainchild of its founding editor, Richard Mackie, and his co-conspirator Alan...

The new book is out and, I hope, selling briskly. As well, the first reviews are appearing. Here is a very nice one by Patricia Roy on the Ormsby Review website. Professor Roy has written a great deal about Vancouver, including her own...