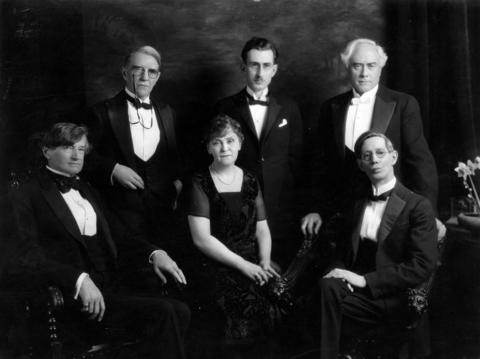 April is National Poetry Month in Canada. Let's celebrate by recalling the Vancouver Poetry Society, one of the earliest arts organizations in the city.

The founding meeting of the VPS took place on the third floor of the Rogers Building downtown on Granville Street on October 21, 1916. It was organized by Dr. Ernest Fewster, physician, theosophist, tireless networker and, of course, poet. Fewster became president of the society, a position he held until his death in 1947.

As you'd expect, members of the society organized readings, lectures and discussions, generally doing whatever they could to promote the appreciation, and practice, of poetry in the city. But Fewster had larger ambitions. He wanted Vancouver to be part of the wider, national literary community and to this end he cultivated relations with eastern poets, especially Bliss Carman and Charles G.D. Roberts.

In the above photograph (courtesy of City of Vancouver Archives CVA125-03), taken in 1926, that is Dr. Fewster back row right. Carman is front row left, seated next to local writers Annie Dalton, a widely published poet, and A.M. Stephen, social activist, novelist and poet. Roberts is standing back row left with Lorne Pierce, the hugely respected editor at Ryerson Press, next to him. In its heyday the VPS was obviously capable of attracting a very prestigious group of literati to its annual gala.

By the later 1940s the society had lost much of its momentum and by 1974, when it folded, its poetics were considered old-fashioned and marginal. In the inter-war period, however, the society put Vancouver on the national poetry map.