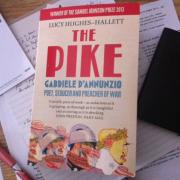 Many years ago I got it into my head to write a history of 1919. So much happened that year after the Great War ended: revolution in Germany, civil wars in Ireland and Russia, a red scare in the US, general strikes, the peace process, slaughter in India, assassination and insurrection everywhere. With so much to tell, the story should have written itself. But, alas, it didn’t. In the end I narrowed my sights a bit and wrote a less ambitious book about the red scare in Canada.

But my interest in the period remains undimmed so naturally I couldn’t resist the new biography of Gabriele D’Annunzio, The Pike, by the British writer Lucy Hughes-Hallett. D’Annunzio was the flamboyant Italian writer who in 1919 was one of the most famous people on the planet.

Hughes-Hallett’s book is subtitled “Poet, Seducer and Preacher of War” and this hardly begins to cover it. D’Annunzio was the energizer bunny on steroids. He wrote dozens of books; he held a seat in the Italian parliament (until it bored him); he was a war hero, risking his life on sorties behind enemy lines; despite his odd appearance (one woman described him as “a frightful gnome with red-rimmed eyes and no eyelashes, no hair, greenish teeth, bad breath, the manners of a mountebank”) he was a sexual tomcat, carrying on tumultuous love affairs with multiple partners at the same time. He was also a scoundrel who neglected his children, seldom paid his debts, betrayed all confidences and is considered to be the father of Italian fascism. In the recent BBC television version of Sherlock Holmes the fictional detective describes himself as a “high-functioning sociopath;” the same could be said of D’Annunzio.

One of the most entertaining of D’Annunzio’s escapades occurred in 1919 when he led a ragtag army down the Adriatic coast to the city of Fiume (now Rijeka) which he occupied and declared an independent city state. It was, writes Hughes-Hallett, “the climactic act of the drama of [his] life.” As long as it lasted, which was about 15 months, Fiume was the place to be for artists, anarchists, secret agents, journalists, drug dealers, pimps, poets and dilettantes. D’Annunzio had seized the place in the name of Italian nationalism but in the end it was an exasperated government of Italy which sent in the troops to drive him out.

The whole preposterous story is told in Hughes-Hallett’s marvellous book, which last year won Britain’s Samuel Johnson Prize for the best English-language book of non-fiction. Instead of a conventional chronological approach, she presents the life in a series of vignettes and set pieces. Much fairer to D’Annunzio than he probably deserves, she deploys anecdote and humour to great effect. Hard to imagine I’ll read a better book of history this year.