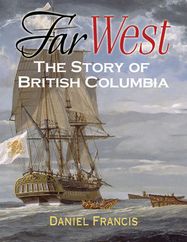 Introduction
Chapter 1
The Original People
The Potlatch
Chapter 2
Major Routes to the Pacific
Furs…Furs…Furs
Building a Trading Fort
Chapter 3
Mad Rush to Gold
Barkerville
The Overlanders of 1862
Changes Brought by the Gold Rush
British Columbia Becomes a Colony
Chapter 4
Railway Bridges
Confederation
The Last Spike
Chapter 5
Our Richest Resources
What Is Economy Anyway?
Chapter 6
The Lower Mainland vs. the Interior
Women and World War I
Chinatowns
Chapter 7
Black Tuesday
The Alaska Highway
Chapter 8
BC Boomtime
Residential Schools
Chapter 9
The Knowledge and Service Industries
What Is in Your Kitchen?
People of BC

British Columbia's colourful story has been told many times, but until now no one has attempted to relate the chronicle specifically for young readers. From the gold rush to the Gumboot Navy and from "brideships" to W.A.C. Bennett, BC history comes alive in this highly illustrated and vivid account by award-winning writer and historian Daniel Francis.

Starting with the story of BC's aboriginal people and their lives prior to the arrival of the Europeans, Far West recounts first contact with early explorers such as Captain James Cook and Captain George Vancouver and the changes the fur trade brought to the "New World." Francis then describes how BC was born, starting with the gold rush and Confederation eras, going through to modern times and speculating on BC's future.

On the way we meet interesting characters from BC's history, people such as Frances Barkley, the first European woman to visit British Columbia in 1787; Joe Capilano, who travelled to London, England, in 1906 to explain to the British king how BC's aboriginal people were displaced by white settlers; and Rosemary Brown, a Vancouver social worker who was the first black woman elected to political office in Canada in 1972.

Quotes from BC people—past and present—and anecdotal sidebars containing little-known BC facts spice up the text. Geared toward readers aged nine and up and richly illustrated with archival photographs, colourful paintings, maps and original illustrations, Far West is a must-have for every BC family.

"Daniel Francis' Far West is a fun, fast read that will appeal to adults and keep children entertained." - Vancouver Courier

"Francis does not sugar-coat British Columbia's past. He may not exactly use this vocabulary, but he does not shy away from racism, class struggle, political corruption, and environmental degradation... The book is lavishly illustrated with photographs, maps, and drawings. Most impressive are the paintings by Vancouver artist Gordon Miller. Many are stunning, and some are reproduced over two facing pages."  - BC Studies

"Francis has an impressive command of the facts, but what really brings this book across is the way the knowledge is broken into tasty, manageable chunks, illustrated with archival photos and enticingly displayed." - Vancouver Sun

"...this book is fun for all ages. Highly recommended." - Victoria Times-Colonist