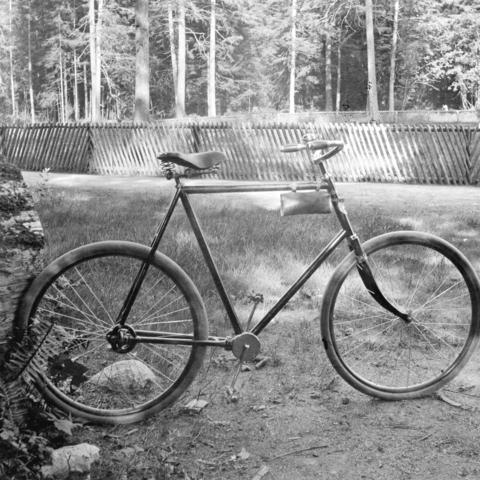 Next week, May 29-June 4 is Bike to Work Week in Vancouver.

Everything old is new again, including bike commuting. The inaugural bicycle in the city was owned by Dr. Robert Mathison, a dentist, who imported it from Ontario in 1887. According to the first archivist, Major James Matthews, by 1900 a bicycle "craze" had swept the city. "Almost every family had at least one," he wrote, "some had more."

"The bicycle became so popular," Matthews continued, "that racks were put up in the vestibules of the small office buildings to receive the 'machines' of those employed there and who had business there. At the City Hall, there was a long rack which would accommodate perhaps two dozen bicycles. Similar racks existed at the C.P.R. Depot, and also public places such as parks, post office and hotel lobbies.

"Dealers in bicycles did a 'land office' business, the managers of wholesale bicycle firms were important men and well known. Repairs shops were many; a knowledge of the merits or demerits of the different makes was essential to any young person with pretences of being up-to-date, and the performance of the best and fastest riders at the big bicycle meetings at Brockton Point and elsewhere were discussed on the corner, in the drawing room and the newspapers."

Nowadays Vancouverites work themselves into a lather about the pros and cons of bicycle lanes on downtown streets, but it turns out they are nothing new. Again, Major Matthews, writing about the early 1900s. "The 'machines' were so numerous that the City Council ordered special bicycle paths constructed on those streets which were most frequently used. These paths were invariably cinder surfaced, and rolled flat, and ran along the edge of the street between the gutter and wooden sidewalk. They were about six feet wide, and constantly kept in order, level and smooth, by city workmen."

The heyday of the bicycle was shortlived. In the pre-World-War-One period it was replaced by the streetcar and then the automobile as the main mode of urban transportation. Cycling continued to be a popular leisure activity, but its days as a commuter vehicle were over. At least until more recently.

You can find out more about Bike to Work Week here. (Photo courtesy of City of Vancouver Archives CVA466-161903)

Tales of the City #7 - The Greenhill Park

While waiting for my next book, Becoming Vancouver: A New History, to be published -- delayed by the COVID situation -- I thought I'd introduce the project by telling some "tales of the city." You'll recall the mega explosion that...